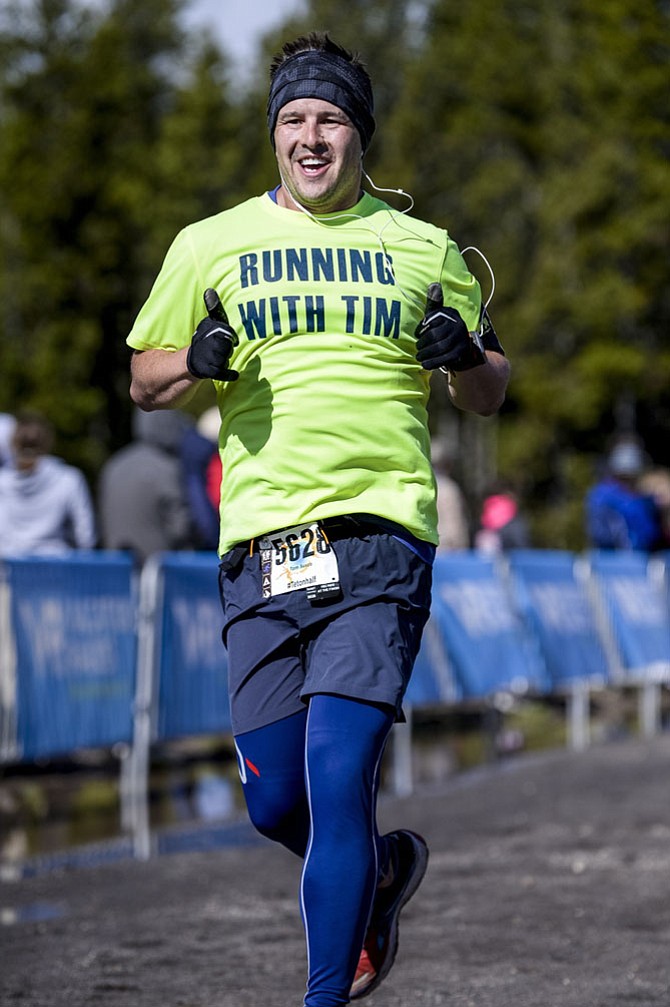 Tom Susco, Tim’s older brother took up running after his brother’s death, as a way to cope with his grief and to feel closer to Tim. “Tim was the runner in the family, not me.” Tom is well on his way to his goal of running at least a half-marathon in all 50 states in Tim’s memory. Photo courtesy of Susco Family 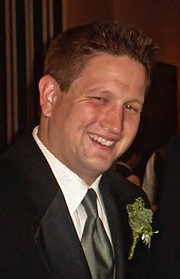 Tim Susco — the reason his family supports the Brain Aneurysm Foundation and the Washington Regional Transplant Community with an annual charity race. Susco died suddenly of a brain aneurysm 10 years ago at age 25.

The Susco family participate in a run on Moab, Utah. The goal to “Run with Tim” in all 50 states belongs to brother Tom; dad Tom, mom Nancy and other family members join in when then can.

On Saturday, Sept. 16, the Susco family of Reston will host the 10th annual “Running with Tim” 8k race and 2k Walk/Fun Run to benefit the Brain Aneurysm Foundation and the Washington Regional Transplant Community. The event is a personal one for Tom Sr., Nancy and their son Tom.

Ten years ago, the Suscos received one of those dreaded late-night phone calls. Twenty-five-year-old Tim Susco, living in California and pursuing his dream of a career in the film industry, had collapsed while shopping in a Los Angeles record store.

“It came out of the blue, no warning,” said his mother. “Tim was the family athlete,” added his father. “Cross-country at school. Always the best of health.”

Tim suffered a brain aneurysm that day. Despite receiving emergency medical treatment within minutes of the onset of the incident, Tim lapsed into a coma. Four days later, with his family beside him, Tim Susco died.

IN THE MIDST OF THEIR GRIEF and the details that had to be handled so far from home, there was one solid platform that the Suscos could stand on while they coped. Almost 10 years before this tragedy struck, the family, including Tim and his older brother Tom, Jr., had discussed organ donation, made their individual decisions and made their wishes known to each other. “Just in case,” said Nancy.

Such a conversation might seem a bit odd for a family to have, especially as it was held over the Thanksgiving holidays, but the family has a medical background, with Tom, Sr. a pharmacist, and Nancy a nurse at Reston Hospital Center, so the idea wasn’t completely foreign to them. The timing was because Nancy had just participated in the South Lakes High School Ethics Day, where both of her boys attended. On the agenda that day was talking to students about organ and tissue donation. The whole family agreed that this was something they wanted to.

That decision gave them some focus in the immediate aftermath of the moment that changed their lives. Nothing but time could ease the intensity of the grief that this close-knit family was feeling in those early days following their loss, but the fact that immediately after his death, others were being given a chance to continue their lives as a result of the donation of Tim’s organs, brought a small degree of comfort.

“With his heart and lungs, Tim gave almost 10 more years of life to a man in Hawaii, who got to spend that much more time with his family,” said brother Tom. “A high school student and a 3-year-old benefited as well, and are here today because of Tim’s donation.”

Back at home, even knowing that something good had come from their personal tragedy, wasn’t enough to help the younger Tom cope with the loss of his sibling, only two years his junior. A friend suggested he take up Tim’s favorite past-time — running.

“I was not a runner. That was Tim’s thing,” said Tom. But he soon found that it did help with his grief, and “made me feel close to Tim again, in doing this.” Tim’s spirit and his love of the sport have no doubt inspired his brother. In 2011, Tom set himself a goal to run at least a half-marathon in every state in Tim’s memory. He’s not doing too bad in that effort. So far, Tom, Jr. has run in 5 marathons and 44 half-marathons in 38 states, including the District of Columbia. His parents and other family members have joined him on several of these adventures.

Still, the Suscos decided that they had to do more as a family to honor Tim’s memory, and keep the “good stuff going.”

THE YEAR FOLLOWING HIS DEATH, they organized the first annual “Running with Tim 8k and 2k.”

Nancy recalls how kind the organ donor association in California had been to her family, so it felt right to share the proceeds with a local group doing the work in the area – the Washington Regional Transplant Community (WRTC).

The WRTC, established in 1986, is a nonprofit, federally designated Organ Procurement Organization, covering Northern Virginia, D.C. and Southern Maryland. They are responsible for the recovery and allocation of organs, eyes and tissue, as well as providing care for donors and their families.

“There are more than 2,600 Virginians on the organ waiting list,” said Valerie Schneider of the WRTC. “One donor can save the lives of up to eight others and enhance the lives of more than 50. We are so grateful for people like the Suscos.”

The Brain Aneurysm Foundation is the other recipient organization of the funds raised through the “Running with Tim” race.

“It’s not a well-known disease or cause of death. It usually comes on so suddenly, with few, if any symptoms,” noted Nancy, and “it doesn’t get much attention or funding.”

In their own quiet way, the Suscos go about helping financially, and doing what they can to raise awareness. They have even been to Capitol Hill on a Lobby Day to talk with lawmakers about this sudden, often silent and usually deadly condition that can strike at any age.

“Honestly,” said Tom, Sr., “we thought maybe the run would be a one-time thing, but the interest has been there to keep going, and so we do.” Both his parents and his brother characterize Tim as “a real hard-worker, who would pay his dues and do the work.” The Suscos don’t want to let their missing team member down.

Those wanting to “Run with Tim” for the 8k, or do the 2k Walk/Fun Run, or volunteer to help the event or donate to the cause can visit www.susco8k.com. Registration is now open for the event, which begins and ends at South Lakes High School in Reston.