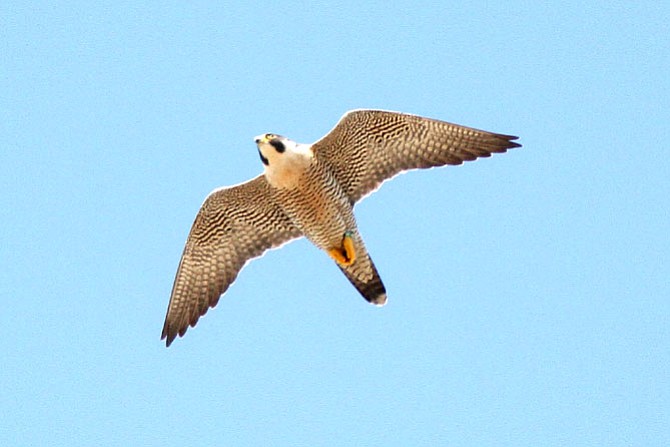 The male peregrine in the air in Reston: The falcons may remain in the Reston area for a short period of time, but after that will probably fly off to other locations in Virginia or elsewhere. It is possible that the adult falcons will return to the Reston area to nest in 2017. Photo by Donald M. Sweig

Male Peregrine falcon, on left, flies off after mating/copulating with the female on corner a of Reston Office building on March 24, 2016.

Four juvenile Peregrine falcons on nesting ledge on June 7, 2016. Note the bird on the far left exercising wings; it is actually slightly up in the air over the ledge.

In June 2015, there was a mystery in Reston. Two young, recently hatched, Peregrine falcons were found on the ground by local Reston residents. The birds, which presumably had fallen from a nearby nesting location, did not seem to be seriously injured, but were not yet able to fly. The young falcons were taken to the Raptor Conservancy of Virginia for some short term rehabilitation, and soon after were successfully released into the wild in Shenandoah National Park as part of an ongoing Peregrine falcon relocation and reintroduction program of the National Park Service (NPS) and the Center for Conservation Biology (CCB) in Williamsburg, Virginia. For the falcons it was a happy ending. But the mystery in Reston remained. Where had the young falcons come from? There were no known breeding pairs of Peregrine falcons or known nesting locations anywhere near Reston. And, finding the nesting location was not a trivial matter.

Peregrine falcons were once a regular, though uncommon, breeding bird in Virginia. In Northern Virginia, they were known to have nested in the 1930s, and perhaps as late as 1941, near the mouth of Difficult Run and the Potomac River. However, by the early 1960s, due to shooting, egg collecting, and primarily the widespread use of pesticides, such as DDT, the Peregrine falcon had been extirpated in Virginia and much of the eastern United States and southern Canada. In the early 1970s, Peregrine falcons were listed as a federal endangered species and received other federal protections as well. Meanwhile, in the late 1960s, an unprecedented and innovative captive-breeding program was initiated, primarily at Cornell University and the Peregrine Fund in upstate New York. Subsequently, in Virginia, a Peregrine falcon restoration program was begun in 1978. Between 1978 and 1993 over 240 young captive-reared Peregrine falcons were released in Virginia. There are now over 25 known nesting pairs in the Commonwealth.

Currently, the CCB, in cooperation with other Virginia and federal agencies has primary responsibility for monitoring and managing the known breeding pairs of Peregrine falcons in Virginia. So, a previously unknown nesting site used by the Peregrines in Reston was of more than passing interest and concern. In hopes of locating the Peregrine nesting site in Reston, in early 2016, trained raptor spotters, working with the CCB, begin monitoring the skies in and around Reston looking for Peregrine falcons. By late March 2016, a probable nesting site had been located on an office building in Reston and the birds had been seen mating/copulating on other nearby office buildings, a sure sign of their intention to breed. It was determined that the female had probably laid eggs and was beginning to incubate in very late March or early April. The actual nesting location was sufficiently obscured so that it was not possible to see it from the available observation points. So there was nothing left to do but wait. (Peregrine falcons incubate their eggs for about a month before hatching and it takes another five or six weeks for the birds to be able to fledge and fly from the nest area.)

Normally, biologists from the CCB would attempt to access a known Peregrine falcon nesting site before the birds fledged in order to determine the sex of the young birds and the place identifying bands on their legs. In Reston, as the nesting location was on private property and there were security and other concerns, the CCB was not able to access the nest, and so trained volunteer observers were once again asked to help. In mid-May, the adult falcons were observed delivering food to the nesting ledge for the hatchlings by a CCB observer, and a day later by myself. Provisions were also made for rescue and rehabilitation should one of the young falcons again be found on the ground. Fortunately, no such rescues we needed.

Then on June 4, three young Peregrine falcons, and perhaps a fourth, were seen on the nesting ledge and reported to the CCB. Three days later, on June 7, I was able to observe and photograph four juvenile Peregrine falcons at the nest site. At this point, there was much wing flapping by the young birds on the nesting ledge and one of the birds seemed almost ready to fly. Three days later, no young or adult falcons were observable at the nest site. Presumably they had fledged and flown off the ledge. A couple of days after that, at least one, perhaps two, young falcons were seen flying around and perching on the office buildings in Reston, and there was one short but dramatic exchange of food between an adult and a juvenile in the air over Reston, with much loud calling by both birds. As all four of the young falcons had presumably fledged successfully, no further monitoring was done.

The falcons may remain in the Reston area for a short period of time, but after that will probably fly off to other locations in Virginia or elsewhere. It is possible that the adult falcons will return to the Reston area to nest in 2017. So, if you keep your eye out in the skies over Reston this summer you might see young or adult Peregrine falcons flying around, or perhaps late next winter or early spring, you might see the adults returning for another nesting season. A Peregrine falcon is a dramatic and memorable bird to see in the air, so keep an eye out for them.

Donald Sweig, an avian raptor enthusiast, birder, and photographer is an occasional contributor to the Connection.