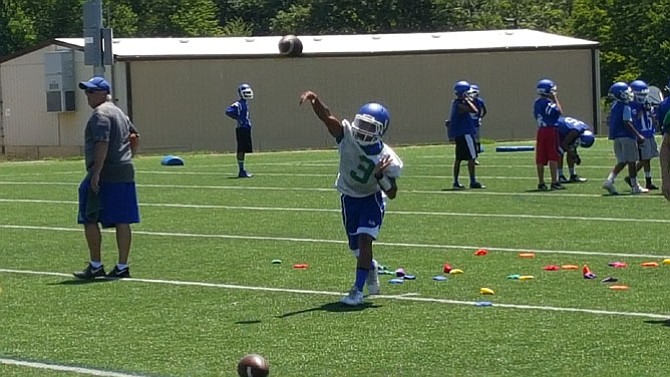 Rising sophomore Devin Miles takes over as South Lakes’ varsity quarterback after leading the freshman team to a 9-1 record in 2014. Photo by Jon Roetman.

Trey Taylor’s first season as head coach of the South Lakes football team ended with a 2-8 record, including a 49-0 loss to rival Herndon.

Entering his second campaign with the Seahawks, Taylor said the team’s work in the weight room should help lead to better results in 2015.

“Improvement, [making the] playoffs and beating Herndon,” Taylor said, “would probably be the big three on the list.”

Kroll will play right tackle in South Lakes’ spread option offense. Taylor said the Seahawks will huddle this year after failing to gain an advantage from running an up-tempo attack last season.

RUNNING THE OFFENSE will be rising sophomore quarterback Devin Miles, who led the freshman team to a 9-1 record in 2014. Taylor said, at this point, Miles’ mental skills are ahead of his physical abilities.

“Devin’s a great leader and he’s going to always work to get better,” Taylor said. “That’s the thing: If he does make a mistake, then you know he’s coming back the next play and he’s doing everything he can to correct it. ... Once his body catches up to what his mind does, I think he’s going to be one of the best in the area.”

Miles already has the respect of his most experienced pass-catching threat.

“Devin’s better than we’ve had, ever,” rising senior Seth Ravenstahl said. “... He’s the best quarterback that I’ve played with.”

Ravenstahl is entering his third season as a member of the South Lakes varsity. He has played multiple positions, including lining up at quarterback as a sophomore. This year, he could play receiver, tight end or running back.

“He is definitely the most versatile of the guys out there,” Taylor said. “... We don’t worry about where we put him. If we need to put him in position x, y, z, whatever, I know he can play anywhere on the field.”

“When it just comes to running a route on air, he’s as good as any of them,” Taylor said. “But he’s gotten much better at the actual how-to-work-against-a-defense [part] of things.”

South Lakes’ 4-2-5 defense will be led by Ravenstahl at linebacker, Kroll at tackle and Fain in the secondary.

SOUTH LAKES will scrimmage at Oakton on Friday, Aug. 21 and at home against Woodson on Aug. 27. The Seahawks will open the season on the road against Marshall at 7:30 p.m. on Friday, Sept. 4. The team’s first Conference 6 contest will be on Sept. 18 at Yorktown.

“I think that the people coming to watch us play will have lower expectations due to our record last year,” Fain said. “But as a team, we set our expectations pretty high this season.”