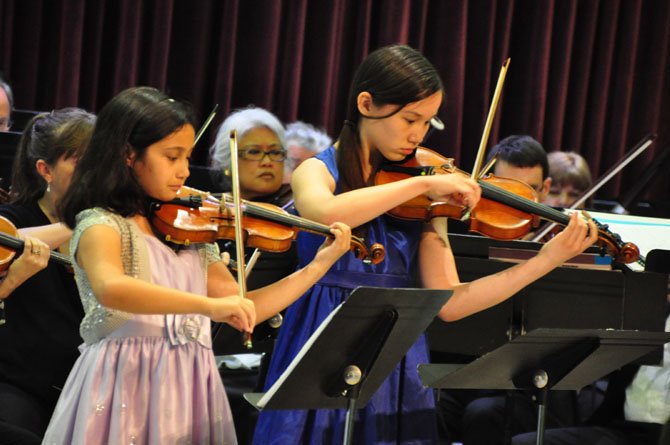 From left, Grace McKay, 10 and Sarah Slate, 12, perform as soloists with the Reston Community Orchestra Sunday, May 19. Photo by Alex McVeigh.

Reston — The Reston Community Orchestra concluded their 25th season Sunday, May 19, with a performance at the Reston Community Center. The concert featured four local student soloists, which has been a tradition for the ensemble’s final show of the season for years.

The Reston Community Orchestra and McLean Symphony will host four summer reading sessions this summer, giving all local classical musicians a chance to join with the ensemble for an open rehearsal. The dates will be on four consecutive Mondays, July 22 and 29 and Aug. 5 and 12 from 7:30 to 10 p.m. at the Sunset Hills Montessori School, 11180 Ridge Heights Road, Reston. The cost is $10 each, or $35 for the entire series, if prepaid.

“[Reston founder] Bob Simon is always telling us that he’s worried about the fact that most of the audience of classical music are older, he says he sees a lot of gray hair in the audience, including his,” said Beverly Cosham, president of the orchestra. “Bringing in the youth soloists helps us get some young people out there, both onstage and in the audience.”

Music Director Dingwall Fleary started the tradition when he came to the Reston Community Orchestra.

“Featuring the youth in this show allows us a chance to expand out repertoire to material we might not always do,” he said. “And it’s enjoyable from both sides to play with new people, to come together musically.”

The concert started with “Overture in C Minor” by composer Luke Waddell, a local student.

“In a program dedicated to highlighting our youth, it’s only appropriate that we begin the show with a song by one of our youth,” Fleary said. 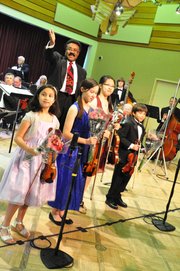 Reston Community Orchestra Music Director Dingwall Fleary thanks, from left, Grace McKay, 10, Sarah Slate, 12, Jenny Lee, 17 and Jasper De Boor, 12, who performed with the group as soloists during their Sunday, May 19 concert.

The students performed “Concertino for Four Violins and Orchestra,” a piece commissioned by the orchestra from composer Michael Ream. Ream has previously played shows with the Reston Community Orchestra, was a member of the McLean Symphony and is currently a member of the Symphony Orchestra of Arlington.

“While I was waiting, and waiting, for inspiration, I started thinking about what kind of music uses four solo violins. There are probably some Baroque concertos for four violins, although I don’t know of any, but the one thing I did think of was mariachi music,” Reem said. “The first movement is clearly inspired by mariachi music, the second movement exploits Spanish rhythms and the third movement makes extensive use of Brazilian rhythms. My intention was to create a piece that I would have fun writing, and one which would be just as much fun for the solo players, orchestra and the listener.”

The four students each performed a solo during the concertino, which was the first song after the intermission.

“I thought the students were a great addition to the performance, the orchestra is wonderful, but they brought a lot of energy to the piece,” said Ellen Hope of Reston, who attended Sunday’s show. “It’s wonderful to see such talent at a young age, and I’m sure they each have a bright future ahead of them.”

Other selections included a Disney medley, the concert suite from “The Polar Express” and Josef Haydn’s Symphony no. 101, known as “The Clock.”