It's not coming up roses.

Reston Pride, one of many events on Lake Anne Plaza that attract public crowds. 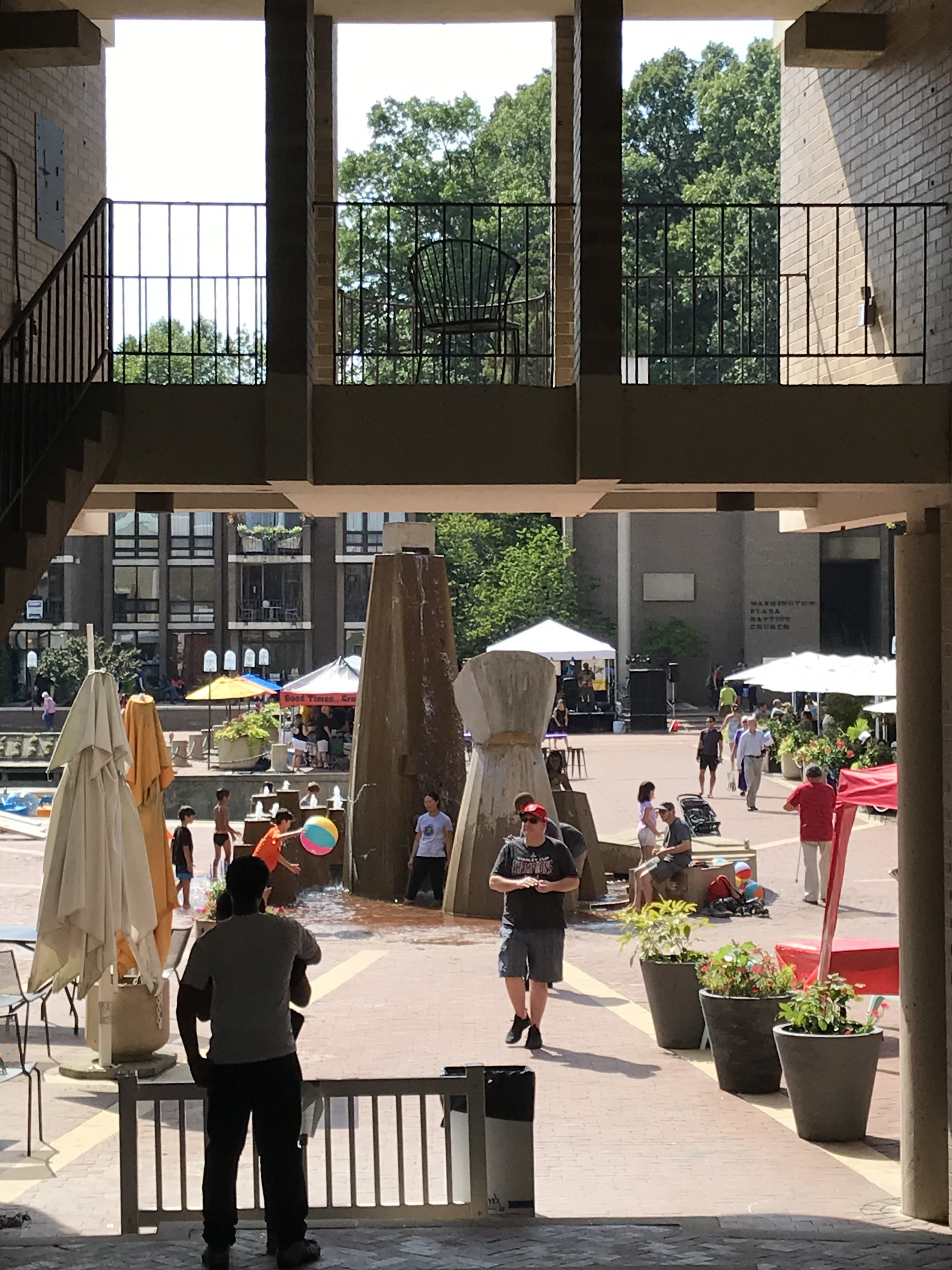 Restoration of the Pyramid Park sculpture and the Fonseca Monolith is part of the proposed "Lake Anne Rising-Phase-1" beautification project.
beautification of Lake Anne Plaza could be delayed or curtailed. Margaret Gupta, president of the Gupta Family Foundation, wrote in an email that while the attorney for the Lake Anne of Reston Condominium Association [LARCA] and their attorney had agreed upon project terms for the proposed "Lake Anne Rising-Phase-1" beautification, given the project's short implementation timeline, they had expected the LARCA board to move quickly. But that does not appear to be the case.

"The LARCA board is greatly appreciative of the aspirational proposal," said George Hadjikyriakou, the newly elected president of the LARCA board, in an email. LARCA's role as a board is to provide proper governance by ensuring the association's bylaws are followed and the property is maintained and in good repair, he said.

According to Hadjikyriakou, the Reston Historic Trust and Gupta Family Foundation presented their beautification proposal at a meeting of their supporters in November. However, LARCA and the property owners have yet to receive a detailed plan.

Gupta said they were "hearing rumblings" that LARCA wanted to add new conditions to the agreement that was already finalized by their lawyer, which she said would "essentially render the project impractical."

When LARCA could not commit funds to its noted aspirational goal of $45,000 by either the project’s first or the extended deadline, Dec. 1 and Dec. 6, respectively, some Lake Anne property owners banded together and pledged the funds themselves.

The proposed beautifications include, among other things, installing a sign at the plaza's entrance and restoring the Pyramid Park sculpture and the Fonseca Monolith, as well as installing new plants in the plaza's 15 planters and cleaning the concrete and bricks.

According to Hadjikyriakou, Shashi Gupta, Margaret Gupta's husband, submitted a contract on behalf of the Reston Historic Trust. It was then sent to LARCA's general counsel to ensure it complied with LARCA's bylaws. The LARCA board asked its lawyer to suggest changes to the contract so its terms would align with their bylaws.

"At no time was an agreement reached by either party," Hadjikyriakou said.

He added that, as they understand it, there are aspects of the proposal that would require a membership vote due to the proposed cost of modifications and improvements of over $25,000. Also, it was noteworthy that the county's Architectural Review Board must approve any modification to the common property. "Their approval of any such modifications will need to include a guarantee that our ability to qualify for future grants or tax credits for needed rehabilitation work to our property will not be negatively impacted," said Hadjikyriakou.

LARCA owns the private plaza, frequently used for public events. Reston Historic Trust and Museum, a business on the plaza, produces its annual Cardboard Boat Regatta, a fund-raiser there.

Free public events like these and those by others draw thousands of visitors at a time to the privately-owned plaza, resulting in wear and tear that is currently the responsibility of LARCA. Maintenance delays due to tight budgets have hampered LARCA's upkeep and improvements for many years.

"We are working hard to prioritize the many issues before our board, such as responding to our owner's requests for heat, repairs to their units, waterproofing, balcony repairs, and the voids under the Quayside building from the months of water leakage, while developing a budget to include funding for these needed repairs," said Hadjikyriakou.

According to Gupta, the proposed next step for the project is to await a response from LARCA.

"However, due to LARCA's requirement that the project is completed by April-end before the farmer's market starts, we will have to assess the feasibility if and when LARCA decides to move forward," she said.