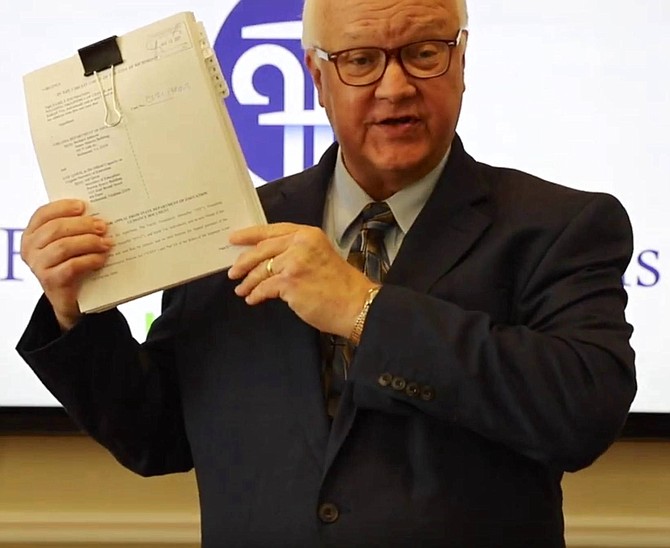 Victoria Cobb, president of The Family Foundation of Virginia. 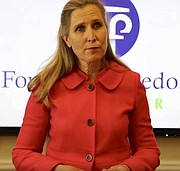 Kristen Allen represents a group of parents in Arlington called The Arlington Parent Coalition opposed to the recently adopted  Model Policies for the Treatment of Transgender Students in Virginia's Public Schools.

The outcome of two lawsuits filed in Circuit Courts the last week in March threatens the treatment of transgender students in all Virginia school divisions, including Fairfax County Public Schools.

On Monday, March 29,  Christian Action Network filed a Motion for Intermediate Relief  pursuant to Va. Code § 2.2-4028  in the Circuit Court for the City of Lynchburg, Va., asking the court to postpone implementation of "Model Policies for the Treatment of Transgender Students in Virginia's Public Schools."

On Tuesday, March 30, the Founding Freedom Law Center (FFLC), along with The Family Foundation and Sarah Via, a parent from Hanover County, filed as appellants in the Circuit Court of the City of Richmond a Petition for Appeal From State Department of Education Guidance Document against appellees Virginia Department of Education (VDOE)  and Atif Qarni, in his official capacity as Virginia Secretary of Education over its recently adopted  Model Policies for the Treatment of Transgender Students in Virginia's Public Schools.

ACCORDING TO THE MODEL POLICIES, the fundamental guiding principle is that all children have a right to learn, free from discrimination and harassment. The policies will, among other things,  allow students to use bathrooms, locker rooms, and changing facilities that conform to their gender identity or expression, as well as use pronouns and a name so reflective. The policies also address bullying, dress codes, and school record-keeping, holding educators and administrators accountable.

Jim Davids is Chief Counsel of the Founding Freedoms Law Center. He argued that the 30-page suit with exhibits seeks to stop the effective date of these policies to enable VDOE,  as well as school boards, to have more time to study the effects of policies on transgender students and students "who have no gender dysphoria."

Davids urged prudence, saying they were asking the court to send the document back to VDOE. He alleged legal errors and the need to remove constitutional violations of the guidance document. "Sit back; let's walk through this together...We want to work with the Department and school boards to frankly avoid the injury that accompanies poorly thought out governmental policies." He referenced Japanese Americans' internment during World War II and that it took thirty years for an apology. Davids claimed in his statement, "Most of these students (transgender)  revert to their biological sex anyway before leaving adolescence."

VDOE developed the document in response to House Bill 145 and Senate Bill 161, enacted by the 2020 Virginia General Assembly last March. Thirty-four stakeholders throughout the Commonwealth provided input and offered expertise.

FCPS Pride has fought for years for regulations. In May of 2015, Fairfax County Public Schools (FCPS) added gender identity to its nondiscrimination policy. In July of 2016, FCPS  finalized and made immediately effective regulations on how the school system responded to transgender and gender non-conforming students, choice of names, bathrooms, and other concerns.

Plaintiff Family Foundation of Virginia is a  conservative nonprofit, faith-based organization. It lobbies against same-sex marriages, funding of abortions and holds a core principle that "Gender [is], beautifully expressed as either male or female according to God's immutable design," as cited on its  Family Foundation website.

Victoria Cobb, President of The Family Foundation of Virginia alleged during the March 30 filmed FFLC news conference published to Facebook that the guidelines replace fundamental parental rights and protection of bodily privacy and safety rights for their youngest students.

Kristen Allen represented a group of parents in Arlington called The Arlington Parent Coalition. She, too, spoke at the news conference on March 30 in opposition to the guidelines.  Allen said that parents could no longer protect their children in public schools and were concerned about children who struggle with gender dysphoria. "Current policies lead to damaging outcomes for these students while demanding transgender ideology indoctrination of all children," Allen said.

"The members of FCPS Pride, including LGBTQIA staff, parents of LGBTQIA+ students, and LGBTQIA+ families in Fairfax County Public Schools, are shocked that these organizations would try to foster such an unfriendly and unwelcoming atmosphere in our schools for Transgender and Gender-Expansive children,” said  Robert Rigby Jr., co-President of FCPS Pride and 22-year veteran teacher in FCPS. “But we acknowledge the ongoing work that FCPS is doing to make our schools welcoming and safe. We have every confidence that FCPS will continue its efforts to be inclusive of Trans and Gender-Expansive students at all levels, despite the unveiled threats of The Family Foundation."

ACCORDING TO FCPS PRIDE, The Family Foundation of Virginia sent a letter to all school boards and superintendents in the state to back off whatever they were doing.

"It can't hurt for us to email our school board members and superintendents (in Fairfax, Dr. Scott Brabrand at ssbrabrand@fcps.edu) with "support for trans and gender expansive children, and a plea not to back off of what it is doing," FCPS Pride posted.

"These guidelines are long overdue and will save lives. If we are truly committed to fostering a caring and inclusive culture in our schools, transgender and gender-expansive students must be treated with the same dignity and respect as everyone else. They need to know they are safe and accepted," said Karl Frisch, Providence District Representative on the Fairfax County School Board. "These lawsuits are little more than a mean-spirited attempt to turn the clock back on equality in Virginia. Our students deserve better than bigotry and hate."

Be it enacted by the General Assembly of Virginia:

A. The Department of Education shall develop and make available to each school board model policies concerning the treatment of transgender students in public elementary and secondary schools that address common issues regarding transgender students in accordance with evidence-based best practices and include information, guidance, procedures, and standards relating to:

B. Each school board shall adopt policies that are consistent with but may be more comprehensive than the model policies developed by the Department of Education pursuant to subsection A.