The student-run and self-taught group, known as Project Caelus, is trying to launch a liquid-fueled rocket to the edge of space. 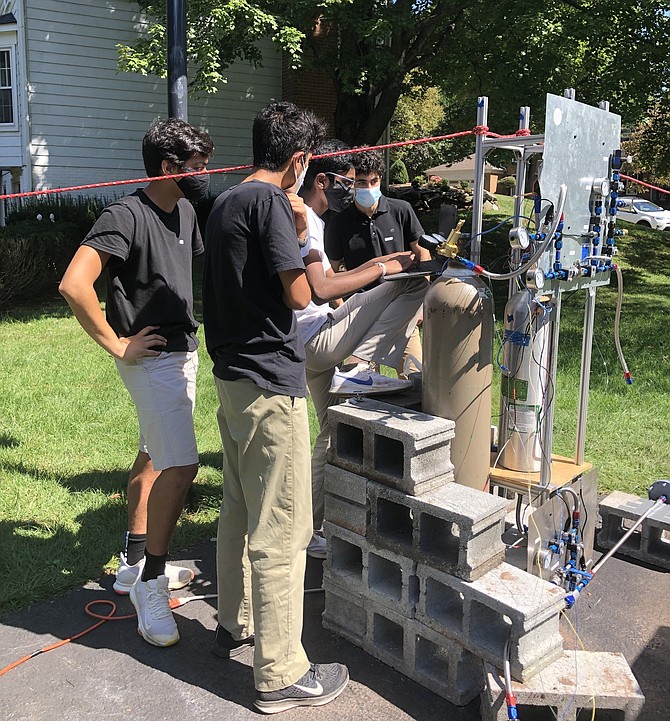 The group works in the garage of Jason Chen, the student who founded Project Caelus, at his home in Herndon.

A group of 26 students at Thomas Jefferson High School for Science and Technology (TJ) just came one step closer to launching a rocket to the edge of Earth’s atmosphere. The group, which calls itself Project Caelus, successfully performed a “cold flow test” this Sunday afternoon, Sept. 13, running cold air and water through their engine prototype to simulate flight conditions.

The final launch is planned for spring of 2023. If successful, the group’s leadership says they will be the first high schoolers ever to accomplish this goal with a liquid-fueled rocket.

The cold flow test comes after nearly three years of largely theoretical work, during which the group conceptualized, designed, and built the rocket’s engine from scratch. Ankit Khandelwal, a TJ senior from South Riding who serves as the Electronics Safety Officer for Project Caelus, said it was a joy to finally see the fruits of the group’s labor.

WITH NO FACULTY ADVISOR, the students are almost entirely self-taught; Project Caelus founder Jason Chen, a TJ senior who lives in Herndon, said that the group has learned almost everything from textbooks and the discussion website Reddit. They currently work out of Chen’s garage, at his home in Herndon.

Chen was inspired to start the project after watching the movie October Sky, in which a coal miner’s son grows up to become a NASA engineer.

“I’d wanted to do something space-related for a while, but didn’t really know what I wanted to do,” Chen said. “[The movie] inspired me to think, you know, if these guys could do it, what’s stopping us from doing something like that?”

The student group is divided into three primary teams. The propulsion team oversees issues related to the rocket’s engine, design, and manufacturing; the programming team oversees the ground software and response mechanisms built into the rocket; and a third team takes care of outreach and finance.

To finance the launch, the group ran an online, one-on-one tutoring program called “Caelus Computing,” in which members of Project Caelus taught computer science and math skills to younger students.

Ron Nachum, a TJ junior and resident of Vienna, the group’s propulsion lead, said that he views the cold flow test as just one step in a longer journey.

“To me, it’s not so much a culmination as a step towards bigger things that I’m looking forward to,” he said. “I’m a junior, so I’m hoping we can get to a rocket launch before I graduate.”

AS UPPERCLASSMEN at TJ, many members of the group will have graduated before the rocket ever takes flight. Srikar Gouru, the group’s software lead and a senior at TJ, says the experience of conceptualizing and building the rocket has been valuable in itself.

“I’ve definitely gotten more out of it than just getting to see a launch,” he said. “Even if we do get the cold flow and static fire going, I think that’s a pretty amazing thing.”

After their successful cold flow test, the group’s leadership is optimistic that they will launch by spring 2023. And as compared with the theoretical heavy lifting they’ve done the past few years, Chen says, “building the rocket will be the easy part.”