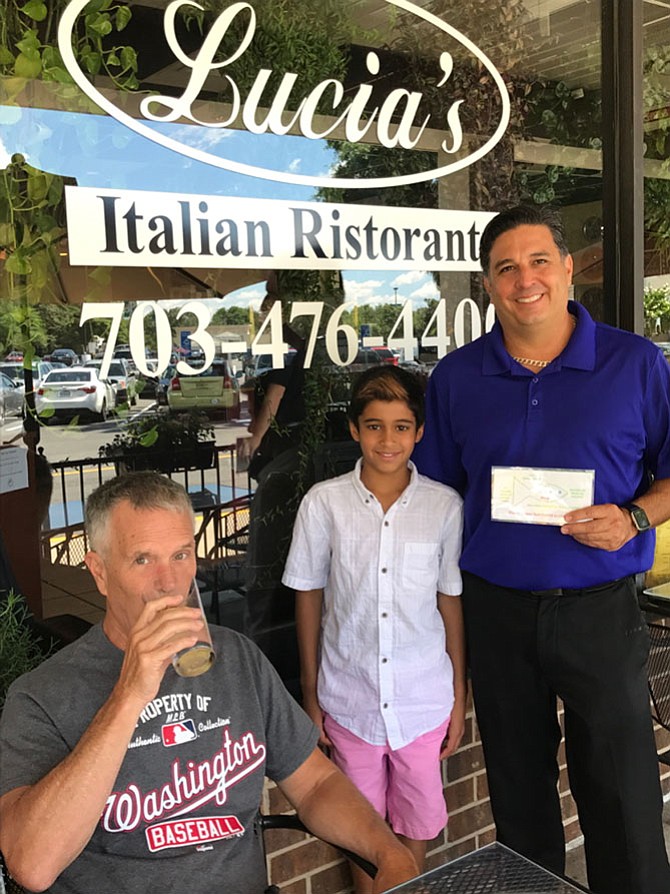 Karan Marari, 11, has his eye on being a marine environmentalist. In the meantime, his goal is to educate and work with local restaurant owners, such as Barrie Impellizzeri, co-owner of Lucia's Italiano Ristorante in Herndon by sharing information with them about the adverse impact plastic straws have on marine life. Jim Powers, a restaurant patron, sips his drink without a straw. Photo by Mercia Hobson/The Connection

In his studies at the Virginia Institute for Marine Science – William & Mary, Summer Science Camp 2016, Karan Marari learned that in the United States, 500 million straws are used daily, which equates to 1.6 straws used each day per person.

When Karan Marari was informed of negative feedback from some of Lucia's customers who believed Marari's "No Straw Campaign" was a way to reduce expenses for the restaurant owner, Marari reformatted his table posters. He added his photo and the reason why he was doing the campaign, taking on the accountability.

Herndon and Reston are not coastal beach towns. There is no bustling Atlantic boardwalk, amusement park, and ocean surf filled with marine life. Yet, when it rains in Herndon, Reston, and elsewhere in the region, stormwater runoff picks up litter – cigarette butts, plastics, and other debris, carrying them to the closest storm drain. Even with grates and detention ponds, polluted runoff usually flows into the nearest run, stream, river or lake, then into the Chesapeake Bay and the ocean. Unlike sewer systems with treatment plants, stormwater runoff is not treated.

Karan Marari, 11, of Reston is passionate about marine science. Although Marari lives in Reston, not a coastal town, he is determined to tackle ocean plastic pollution one straw at a time. His goal is to reduce the use of plastic straws locally with his "no straw request." He is educating restaurant owners, urging them to change their wait staff’s behaviors and practices that lead to the unsolicited placement of plastic straws in patrons' drinks.

While attending a weeklong summer session at Virginia Institute for Marine Studies (VIMS) – William & Mary College, Summer Science Camp 2016, Marari studied the impact of plastic pollution on marine life. He refined his education further, focusing his environmental interest on the seemingly innocuous plastic drinking straw. The National Park Service, U.S. Department of the Interior reports Americans use 500 million straws a day, that’s 1.6 straws per person per day. Recycling of straws is generally an afterthought, and compostable straws can be upwards of four times the cost of plastic straws.

Marari said straws are mistaken for food by marine life, endangering their lives. Straws, being lightweight, float on the top of the water and are caught in under surface currents as well. Straws can become lodged in nostrils, blowholes, and gills of marine life as the animals and fish skim the surface for food or swim. Straws are ingested too. Marari added plastic is non-biodegradable. “It will never disintegrate entirely,” Marari reported. Instead, plastic breaks into smaller and smaller pieces. Marari explained marine animals eat the small pieces, and as ABC.net reports in their article by Genelle Weule, Feb. 27, 2017, there is "evidence of microplastics in deep-sea sediments from the Atlantic Ocean."

A few months ago, Marari said he approached Barrie Impellizzeri, co-owner of Lucia’s Italiano Ristorante in Herndon with his idea of an offer first policy as a best practice. This was to be his first restaurant visit. On Wednesday, June 28, Marari met again with Impellizzeri to recall how his idea came about, review his first meeting, and receive any feedback on how to improve his campaign.

Marari sat at a counter-high table, his feet dangling from the stool. When asked to explain why he had chosen straws out of all the items possibly found in marine pollution, Marari recounted that when he attended VIMS, he learned that the 2016 Ocean Conservatory Report identified cigarette butts as the #1 item found during their cleanup. "I thought, I can't really stop people from smoking," Marari said. But the next group of articles collected- plastic beverage bottles, caps, food wrappers and straws enticed him, Marari recalled. Just as Marari understood he could not stop people from smoking, neither could he go up against major companies that produce drinks and food in plastic bottles and wrappers and persuade them to change.

So Marari considered the one item on the list that was an option for individuals to change, not corporations – the use of plastic straws.

Marari said he next thought about where most plastic straws were used. "I figured it was probably restaurants," he said. "So I made a sign and tried to find restaurants that would support my idea. I decided to come to Lucia's Restaurant first because the owner, Mr. Barrie [Impellizzeri] sponsored an event my mom was doing.”

Asked how he felt presenting his offer first policy that requested the wait staff at Lucia’s only provide straws if asked, Marari looked down. "I was nervous," he said. "That's because I never talked to a store owner before about this sort of business.” Marari added he was also afraid Impellizzeri would reject him and his idea.

Impellizzeri said, “Karan sold me on it. He told me his idea, his background, how he was back from marine bio camp and he had the idea about plastic straws. I thought it was an excellent idea.” Asked if there had been a significant difference in straw usage, Impellizzeri said, “I would say, we’ve had a reduction in the use of straws by 25 percent. I think it was higher at the beginning.” Explaining how he implemented the program, Impellizzeri said, “We switched from putting unwrapped straws in every drink to no straws in the drinks at all. Now we ask the customers if they would like a straw.”

FEEDBACK from customers is vital though. “I’ve heard positive and negative [customer feedback],” Impellizzeri reminded Marari. “Positive, that it is a great idea. I never thought about that before. And when I tell them how it started and with whom, they are astonished by a young man coming up with this idea and taking it on."

Marari shared that he had to reformat the design of his poster, as feedback from some Lucia’s customers indicated they believed the offer first policy was Impellizzeri idea to save money, cut expenses. “A few weeks into it, some people began saying it was just the restaurant wanting to save money. I don’t know why they would think that,” Marari said out loud. "So I wrote a biography on the back of my poster.”

As for the impact of one person, a child, dedicated to create change, Impellizzeri said that when he speaks with customers and tells them about Marari, his campaign, and that he is only 11, “It gives me goosebumps while telling Marari’s story to customers, about this young man and his vision of the future.”

Asked if he'll keep the campaign going, Impellizzeri, said, "I’ll keep this going as long as I can. It’s a smart decision. You don’t have to drink out of a straw. And we all share the same planet.”

Marari continues to approach restaurant owners in Reston, Herndon, and Maryland about his campaign to reduce plastic straw usage through an offer first policy. The most recent restaurant to sign on is Passage to India | Spice Xing by Chef/Owner Sudhir Seth located in Maryland.

For more information about choosing to be straw free, email Noplasticstraws@gmail.com.