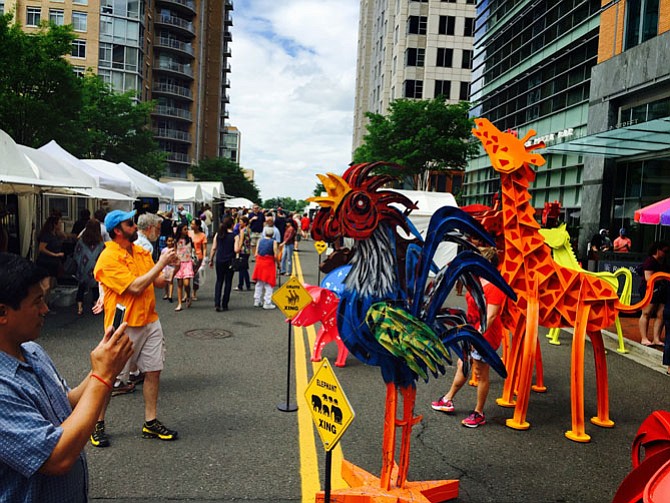 Reston Town Center is the home of the Northern Virginia Fine Arts Festival and many other community events already, but with the coming of the new Metro station, there will be an increase in density and development.

Tall Oaks Development Company filed a Planned Residential Community plan to redevelop the property with a mix of residential and retail uses.

The proposed redevelopment will consist of 70 condo flats, located in two multifamily buildings with garage parking underneath each building; 42 two-over-two multifamily units with a combination of garage and street parking; 44 single family attached dwelling units; and 7,000 square feet of community-serving retail sales.

Reston’s founder, Robert E. Simon, died Sept. 21, 2015 at 101. Simon’s last speech before the Board of Supervisors concerned his vision for plazas to be prominent for all the Village Centers. “It is very important for Tall Oaks to become a real village center and as a precedent to the other village centers, all of which are shopping centers.

Tall Oaks is within about a mile of the new Wiehle-Reston East Metro station.

The Planning Commission scheduled a public hearing for May 4 at 8:15 p.m.

Advocates for the Reston Regional Library, police and Embry Rucker Shelter want to ensure that Reston meets the needs of all residents with state of the art facilities.

According to the Reston Association:

“The Fairfax County Department of Purchasing and Supply Management released a solicited public-private partnership request for conceptual phase proposals for the redevelopment of the Reston Town Center North parcels in late June.

“The county seeks to enter into a public-private partnership to redevelop the existing Embry Rucker Shelter and Reston Regional Library as Phase 1 of a mixed-use development proposed for the overall Reston Town Center North area. The mixed-use development will include affordable housing, public services and private development. The area under review is denoted on the accompanying map as Blocks 7 and 8.”

JBG proposes 504 multi-family residential units and up to 61,000 square feet of retail use at 1831 Wiehle Ave. The rezoning application proposes rezoning from I-4 Industrial District Medium Intensity to the Planned Residential Mixed-Use (PRM) district to develop a mixed-use, transit-oriented development in the Wiehle-Reston East Transit station area.

The application also includes a conceptual and final development plan depicting the layout of the residential and retail uses for the property.

General Dynamics plans to move its headquarters to Reston.

According to Supervisor Cathy Hudgins, the proposed development will replace the previous approval of three office buildings (up to 357,694 square feet) and extensive surface parking with a single office building of five stories (190,000 square feet), with an option for future expansion.

Comstock’s Reston Station Holding seeks to increase the overall maximum density of Reston Station from 2.5 floor area ration to 3.5. The Application also proposes an increase in maximum building height of three of the eight buildings (Buildings 6, 7 and 8) from 140 feet to 240 feet.

Rezoning/Final Development Plan with special exception from light industrial to planned development commercial including 500 new dwelling units and a hotel with 175 rooms.

Planning Commission hearing not yet scheduled.

A Planning Commission public hearing has not been scheduled.

The application calls for 37 urban-style single family attached dwelling units with associated parking and recreational amenities with its rezoning and final development plan application and development plan amendment. The existing office building and surface parking will be removed. Access will be provided via a single full movement access point off Roland Clarke Place and the development will be served by private streets and alleyways.

The application, if approved, would rezone the property from Industrial District I-5, Planned Residential Community and Residential Estate to the Planned Development Housing-12 (PDH-12).

A Planning Commission public hearing has not currently been scheduled.

On Dec. 10, 2015, the Planning Commission voted unanimously to recommend approval of this application. The Board of Supervisor public hearing is currently scheduled for Tuesday, Feb. 2, 2016.

In the median of the Dulles Airport Access Highway/Dulles Toll Road just west of the Reston Parkway overpass. Serves Reston Town Center, Phase 2 of Silver Line projected to open within the next five years.

Phase 2 of the Silver Line project, will extend service from the end of Phase 1 at Wiehle-Reston East in Reston, through Herndon and Washington Dulles International Airport and into Loudoun County.

WMATA and its partners have filed a special exception and planned residential community plan to allow the the north entrance to the Reston Town Center Station for an electrically powered regional rail substation. In addition, the build-out will include the station entrance pavilion/pedestrian bridge which will be owned and operated by WMATA.

The Planning Commission public hearing was heard on Jan. 13, and The Board of Supervisors public hearing is currently scheduled for Feb. 2 at 3:30 p.m.

A Planning Commission public hearing on its filed Planned Residential Community plan (PRC 86-C-023-02) is scheduled for March 16 at 8:15 p.m.

Pulte Homes wants to replace a single-story office building with 42 stacked townhouses at 1825 Michael Faraday Drive. It seeks to rezone the property from an Industrial District I-4 to a Residential District R-30 on 1.58 acres.

The Planning Commission’s public hearing is scheduled for Thursday, April 28 at 8:15 p.m.

RN Golf (partially owned by Northwestern Mutual) filed notice of its appeal of fall’s County’s Circuit Court decision, which reinforced the land use process, to the Virginia Supreme Court. RN Golf claims by right development in the matter of the land use designation of Reston National Golf Course.

The owners of Reston National Golf Course hope to build housing on the land in the future, but a recent county circuit court ruling will require them to go through the usual rezoning process to do so.

Circuit Court Judge Michael F. Devine made a ruling that protects Reston National Golf Course from being developed, at least until the owners of a golf course navigate the proper channels to seek a land use change, or continue to appeal its case.

“The circuit court ruling on Friday, Nov. 6, is considered a defeat for the owner of the golf course and is significant because any redevelopment of the course must now be preceded by the filing of specific plans with the county, which will then be compared with the ‘Development Plans’ approved in 1971,” said John McBride, Reston Association’s legal counsel.

“These plans are in the county zoning files and clearly limit use of the land to a golf course, open space and driving range. Any change to these approved plans will require amendment approval by the Fairfax County Board of Supervisors. The golf course owner had sought to avoid this requirement for a plan amendment by seeking by-right use status for a number of residential and other uses.”

The proposed development will replace an existing surface parking lot with 260 dwelling units. The existing office condo building will also be rezoned PRM as a secondary use to the new residential use.

A portion of the property (approximately 1.99 acres) will remain Industrial District I-3 and provide parking for the condo office building.

The special exception is to permit commercial off-street parking to serve the office application condo building.

The Planning Commission public hearing is scheduled for May 12 at 8:15 p.m.

The applicant hopes to amend the existing development plan (DP-117) in order to construct 49 Urban-Style single family attached dwelling units at 11720 Sunrise Valley Drive. The PRC Plan and Proffered Condition Amendment are to add proffers to the property. The existing building and surface parking will be removed. The Planning Commission public hearing is scheduled for Thursday, June 16 at 8:15 p.m.

Reston Association CEO Cate Fulkerson has said that the Tetra property may be ready for the community to use by spring 2016.

Reston Association (RA) bought the 3.47 acre Tetra property for $2.65 million in July. Two months earlier via referendum, association members voted to approve the purchase the property for community and recreation use.

“The Tetra Property purchase represents a historic moment for our association. It is the first time in RA’s history that property has been acquired to protect against over development, to enhance green space and to increase community and recreational use opportunities for members,” said Reston Association Board president Ellen Graves.

“Members will not see an impact to their assessment fee from this purchase until 2018 at the earliest,” she said.

The property, which sits between RA's Lake Newport Tennis Court complex and part of the RA’s Brown Chapel Park, creates a continuous band of 98 acres of common area property or parkland.

In March 2015, the Board of Supervisors had approved a massive redevelopment of Lake Anne and surrounding apartments, businesses, and property in March. The project would have included 1,037 new mixed-income residences, more than 110,000 square feet of new retail including a 15,800 square-foot boutique grocery, 82,454 square feet of office space, an amphitheater with outdoor movie screen, an expanded plaza, multiple parks and trails.

There would have been 185 new affordable apartments in two five-story buildings to replace the 181 existing affordable units at the Crescent Apartments.

But Reston was caught off guard in December when developers pulled out of a massive, visionary, grand redevelopment of Lake Anne, apparently due to problems with financing.

“LADP indicated that serious market obstacles exist, and that the initial deal negotiated with the County may not be economically viable at this time,” according to county documents.

One of the biggest questions of 2016 is what will be next for Lake Anne’s revitalization plans following the termination of the contract between the Fairfax County Board of Supervisors and Lake Anne Development Partners LLC.

“We’ll have to reassess,” said Cathy Hudgins, Reston's representative on the Board of Supervisors.

View Reston, some tysons in a full screen map