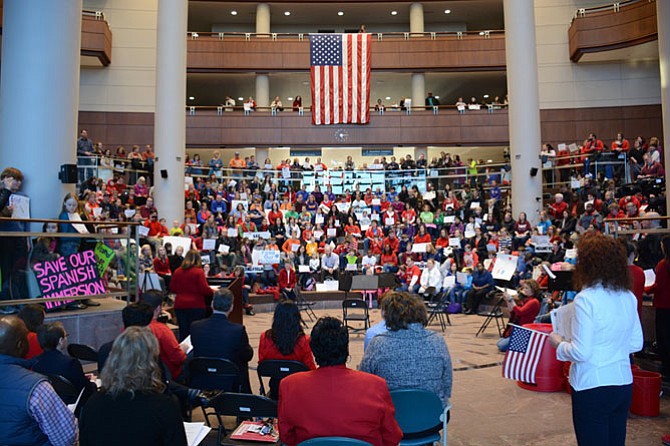 Hundreds of parents and community supporters turned out to spread the message “Invest in Kids” after an advertised Fairfax County budget announced Feb. 16 leaves the public schools system around $68 million short of its requested transfer. Photo by Tim Peterson.

Parents and children held up homemade signs urging support for full funding of Fairfax County Public Schools’ FY 2017 budget as adopted by the School Board.

WT Woodson High School junior Jacob Lamb sings “Corner of the Sky” from the musical “Pippin” at the “Invest in Kids” rally held at the Fairfax County Government Center.

Emotional independent outbursts and communal chants of “Fund our schools” and “Invest in kids” echoed through the grand amphitheater just beyond the entrance to the Fairfax County Government Center.

The same day Fairfax County Executive Ed Long announced his proposal for a nearly $4 billion county budget at the Board of Supervisors morning meeting, school advocacy groups including IamFCPS, the Fairfax County Council of PTAs, Fairfax Education Association, Fairfax FLAGS and Fairfax Arts Coalition for Education, organized a rally in the evening calling for the supervisors to fully fund the FY 2017 budget adopted by the School Board.

That budget, a $121.4 million increase over the previous year, represents not only a 6.7 percent increase in transfer from the county, but also enables Superintendent Dr. Karen Garza to steer the school system forward with no additional cuts to programs or services.

Though Garza won’t formally present her budget to the supervisors until early April, Long’s $3.988 billion proposed budget falls short of the current requested transfer to the school system by nearly $68 million.

“This is not good enough,” said Fairfax Education Association president Kimberly Adams. “Our children are worth more, our community is worth more, and Fairfax is willing to invest a few cents more to make sure our next generation has a bright future.”

Several members of the Fairfax County School Board were in attendance, as well as Supervisor Cathy Hudgins (D-Hunter Mill) and Board of Supervisors Chairman Sharon Bulova.

Bulova, whose introduction was met with lively cheering, attempted to reassure the audience that the budget process is just beginning, and requires public input and communication.

“We’re hearing that communication here tonight,” Bulova said. “Education is our number one priority, but we have to look at the budget holistically.”

Bulova echoed the earlier remarks from Ginwright that “education from the top makes us sure to have an educated community” and added that this is just “the beginning of the budget process, we have to strike the right balance and make sure our children have what they need to succeed.”

McLean High School senior Emily Robinson, who took credit for creating the viral hashtag #SaveFCPS, agreed that “fully funding public schools shouldn’t just be a requirement of governing bodies, it should be the foremost priority.

“I fear for the students who will be in Fairfax County after me,” she said.

Sarah Mattingly was School Board member Sandy Evans’ (Mason District) appointee to the superintendent’s budget task force that met to run the numbers for possible cuts prior to the formation of the school system’s next budget.

She explained to the audience that despite the fact she and her husband don’t even have children in Fairfax County Public Schools, “nothing is more important for us to do as taxpayers, property owners, or residents, than help children.

“I’m not here for my property values,” Mattingly continued, “they’ll be just fine on their own. Today was disappointing, but it’s not over.”