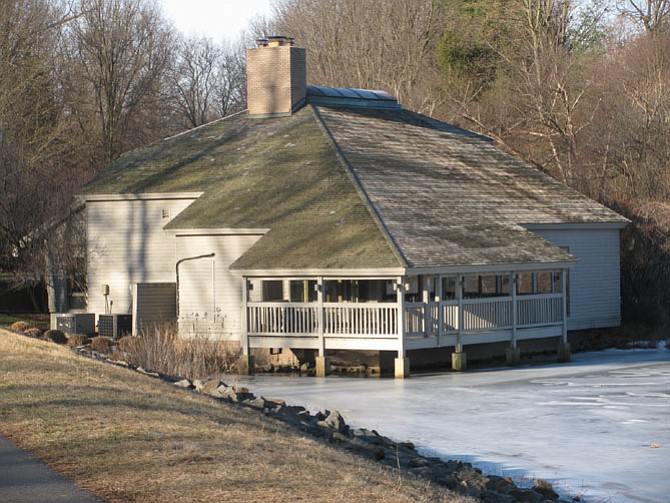 The Lake House, in a photo from last winter, was purchased in July 2015 for $2.6 million, and has been an ongoing source of controversy. Photo by Ken Moore.

The Reston Association Board of Directors met on Dec. 7 to discuss contract issues with the company that was selected to review the association’s handling of the Lake House, a property acquisition and renovation that went over budget and has yielded revenue shortfalls ever since it was purchased in July 2015 for $2.6 million.

“We are trying to get this done as soon as possible,” says Sridhar Ganesan, CEO of MediaWorld Ventures, LLC and president of the Reston Citizens Association.

“Restonians deserve a detailed explanation of what has transpired, recommendations for a better way to handle such situations in the future and a holding to account of those specifically responsible for these major breakdowns.” —Terry Maynard, Reston 20/20 Committee

His company agreed to conduct the review for a $1 fee and was selected in September by a special committee that solicited and screened proposals for the RA. The contract is still being negotiated two-and-a-half months later.

Terry Maynard, leader of Reston 20/20 Committee provided his prepared remarks to the Connection that he delivered during the member comment period of the meeting:

“The RA Board and staff have wasted over $2 million of RA members’ money on Tetra through massive secrecy, ineptitude and deception. Restonians deserve a detailed explanation of what has transpired, recommendations for a better way to handle such situations in the future and a holding to account of those specifically responsible for these major breakdowns.”

The handful of members who spoke at the meeting all agreed that the contract was taking too long to negotiate. Some of them were also concerned with the RA’s level of confidentiality and control.

When the report is finished, it is up to the RA to publish and share with the public, according to Ganesan.

Whether the RA could modify the report before it is published is uncertain.

“Our job is to produce the report, do the analysis, do the review and give it to the Reston Association, then it is up to them,” Ganesan says.

This does not sit well with Maynard.

“If you don’t have an independent review, you might as well not do one at all,” Maynard says.

“As a team, we’ve come together to do this for free because the community is looking for this independent review and for answers—if we are able to get the contract in place,” says Ganesan.

The next board meeting is on Thursday, Dec. 15. The MediaWorld contract is not on the agenda.

In its news releases, Reston Association states that “RA members voted in a referendum in the spring of 2015 to allow the association to purchase the Lake House property located at 11450 Baron Cameron Ave. It was known at the time that the 3.476 acre waterfront property and aging building would need to be renovated.”

One third of eligible Reston Association voters cast ballots, with 53 percent of those voters in favor of authorization for RA Board of Directors to borrow $2.65 million to purchase the Tetra property, formerly known as the Reston Visitors Center. During the month-long referendum, dozens of people on both sides of the debate held a robust dialogue on the merits of purchasing the property.

At the time, many opponents objected to the cost of the building and the value of the purchase. The assessed value was about half the purchase price.