US Attorney General participates in Interfaith Event at All Dulles Area Muslim Society. 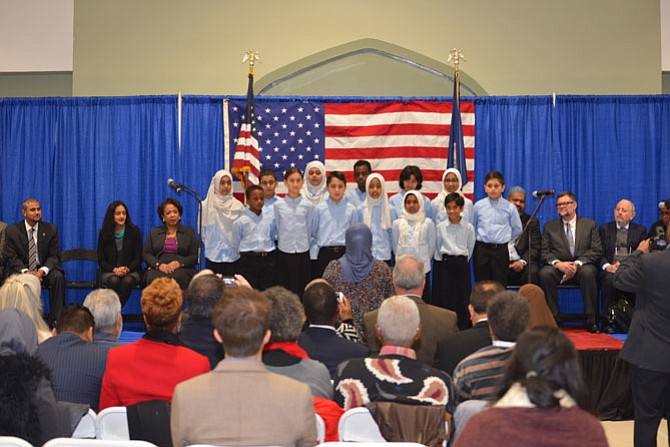 Children from the ADAMS choir helped open and close the event, singing songs of peace to start the program, and ending with “America the Beautiful.” Photo by Andrea Worker.

Rizwan Jaka, Chair of the ADAMS Board, was the host of the Interfaith Event, which included representatives of the Muslim, Christian, Jewish, Hindu, Buddhist and Sikh religions, as well as the US Attorney General, Loretta Lynch.

From left -- Del. Jennifer Boysko (D-86), ADAMS member Somayyah Ghariani, and Del. Kathleen Murphy (D-34) get together before the start of the program. Boysko has been involved with ADAMS since 2005. “They have always been welcoming. I am here to support my Muslim brothers and sisters.” Murphy agreed. “They have always sought to serve the greater community.” Ghariani said she finds their support “reassuring.” 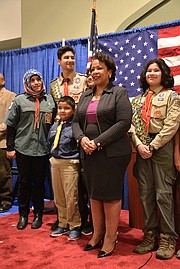 US Attorney General Loretta Lynch poses after the Interfaith event with some of the scout troops from the ADAMS Center. ADAMS is heavily involved in scouting programs and a large number of its youth participate in scouting. 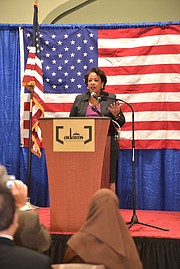 US Attorney General Loretta Lynch addresses the audience at the ADAMS Interfaith Event. “We all love this country,” she said. “We all proudly hold the title of American. When one of us is threatened, we are all threatened.”

The representatives from diverse faiths - speakers at the ADAMS Interfaith event - bow their heads as the opening prayer is given to start the program.

“When one is threatened, we are all threatened. That’s the pledge we made as citizens.” US Attorney General Loretta Lynch expressed her solidarity with all Americans as she delivered the keynote address at the Interfaith gathering at the All Dulles Area Muslim Society (ADAMS) on Monday morning, on a stage that included Muslims, Christians, Jews, Sikhs, Buddhists and Hindus.

Just before Lynch took to the podium, her introducer - ADAMS board member Yasmin Shafiq - took a tumble off the back of the stage. Unhurt, Shafiq didn’t let the incident stop her from making that introduction and told the audience that the real pain she experiences today comes from “these strange times” when after growing up in the ADAMS community with “a faith that was informed by love, compassion and inclusion…there are those who now seek to undermine who I am, who we are.”

Shafiq said she was at a loss to find an appropriate analogy to link her mishap to the proceedings, but Attorney General Lynch said she could. “When you fell, everyone came to help. And that is the story we have to tell today. When one of us falls, we all have to step up without regard to our own safety…regardless of the discomfort it may call upon us. When one of us is in harm’s way, we are all in harm’s way.”

LYNCH’S MESSAGE of unity was echoed by all of the program’s speakers. Pastor Bob Roberts of the Northwood Church in Keller, Texas, said the current atmosphere of fear and intolerance “breaks my heart. I had to come” to the event “because I am a Christian.” Roberts is saddened by the fact that what he describes as his religious “tribe” is one that is often most prejudiced against Muslims. “We have to challenge our own tribe,” he declared. “I will stand with you!”

“No one should be intimidated for practicing their religion as they see fit. We believe with all our hearts in a country that is indivisible, with liberty and justice for all,” said ADAMS Executive Religious Director, Imam Mohamed Majid.

Dr. Rajwant Singh, founder and Chairman of the Sikh Council on Religion and Education told the attendees that Sikhs are often mistaken as Muslims, but that “we are proud to be identified as Muslims, especially now.” Singh also called upon the interfaith community to “protect and make a safe place for our children. That’s the future.”

To thunderous applause, Rabbi Gerry Serotta, Exec. Dir. of Interfaith Conference of Metropolitan Washington, pledged that if there is any movement to demand a registry of Muslim Americans, (as had been suggested during the Presidential campaign) the “Jewish community will be in the front of the line. Bigotry repudiates American values. Hate crimes comfort and support those who would attack our American principles.”

Attorney General Lynch spoke to the reported rise in hate crimes. Referring to the most recent statistics released by the FBI that showed a 6 percent increase in general incidents, and a 67 percent increase in crimes against Muslims – the highest recorded since just after the September 11, 2001 terror attacks - Lynch cautioned, “That doesn’t take into account the many incidents that go unreported. And these numbers are from 2015” – well before the 2016 Presidential campaign hit full stride. Lynch chronicled the efforts the Department of Justice has been making to investigate and robustly prosecute hate crimes, as well as to take proactive measures like initiatives in schools, and training and outreach programs to facilitate better understanding between different groups of people. She pledged that the Department of Justice would continue its commitment to this mission, and that she would also continue to seek out ways to “move us forward” after she has left the office.

“It’s always been hard [the fight for equality in the United States].” Calling on all Americans to work in partnership to protect the progress made “by the sacrifice of so many” and move the country forward, Lynch closed with the reminder that the “highest office in the land, the most powerful, is that of private citizen.”

THE ADAMS Center was established in 1983 by a group of families from Herndon and Reston to serve the local Muslim population. Since then, ADAMS has grown to include additional campuses in Ashburn and Chantilly and six smaller satellite locations. Rizwan Jaka, Chair of the ADAMS Board and the host of the Interfaith event, titled “Standing together as Americans of Diverse Faiths and Backgrounds to Counter Hate Crimes,” noted that ADAMS has a long-standing tradition of serving the community and a special commitment to developing common ground among all peoples through interfaith activities.