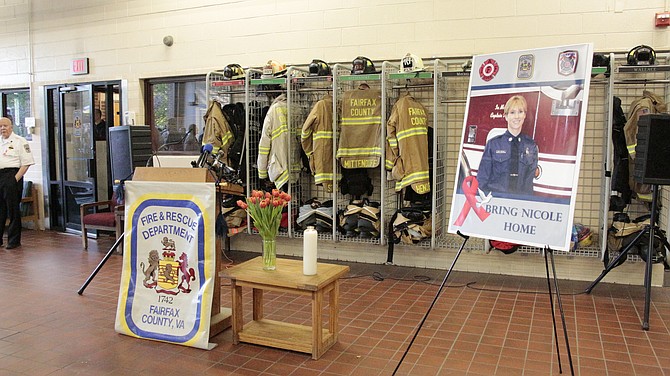 Photos of Mittendorff were positioned in front of the locker where firefighter/paramedic gear is kept. Photo by Reem Nadeem/The Connection

The search for Nicole Mittendorff, a paramedic-firefighter based at Fire Station 32 in Fairfax Station, has been suspended after search teams recovered female remains in Shenandoah National Park they believe to be hers, a release from Virginia State Police said on Thursday, April 21.

“We at Fairfax Fire and Rescue are aware of the posts and are looking into the matter,” Bowers said in the April 23 statement. “I assure you that my department can not and will not tolerate bullying of any kind. At this time, we are respecting the privacy of Firefighter-Paramedic Mittendorff’s family, and providing support to the men and women of the Fairfax County Fire and Rescue Department who are grieving under these challenging circumstances. We will thoroughly investigate this matter and take any appropriate actions needed. However, right now we ask that we be allowed to grieve the loss of one of our own.”

Fairfax County spokesperson Tony Castrilli issued a similar statement asking for people to respect the privacy of Mittendorff’s greiving family and co-workers. He added, “If you or someone you know is experiencing a mental health crisis, or is looking for support, call PRS CrisisLink, 24/7, at 703-527-4077 or text CONNECT to 855-11.”

The morning of Friday, April 22, the candle lit in hope of bringing Nicole Mittendorff home continued to burn at the entrance of Fire Station 32 in Fairfax Station.

Mittendorff, a 31-year-old Woodbridge resident, had been missing since her last known contact with anyone on Wednesday, April 13. The following Saturday, her abandoned 2009 Mini Cooper was found in the parking lot by the Shenandoah National Park Whiteoak Canyon trail entrance.

An extensive search of the wilderness terrain began immediately and continued until 2 p.m. on April 21, when Virginia State Police said a search team of their officers and National Park Service personnel located female remains more than a mile from the same trail entrance where Mittendorff’s car was found. They were 330 yards from the trail in “treacherous rocky terrain,” Virginia State Police spokesperson Corinne Geller said in a statement.

Virginia State Police have made the preliminary identification it was Mittendorff they found, though the remains are being taken to the Manassas Office of the Medical Examination for an autopsy, examination and confirmed identification.

Though it wasn’t initially released, the state police later said a suicide note was found in Mittendorff’s car; they do not suspect any foul play in her death.

Board of Supervisors Chairman Sharon Bulova spoke about the public safety community. ​

Thursday night April 21, Fairfax County Fire & Rescue Chief Richard Bowers said, “I, along with the men and women of the Fairfax County Fire and Rescue Department, are profoundly saddened to learn that the body found earlier today in the Shenandoah National Park is thought to be that of Firefighter-Paramedic Nicole Mittendorff. As we wait for further information, we continue to extend our thoughts and prayers to Nicole’s friends and family.”

Bowers visited Station 32 the next day but did not speak to media; his focus was checking in on Mittendorff’s co-workers and family, and seeing their needs are met.

“We believe that Nicole has been found and is finally coming home, however not in the way we anticipated,” Mittendorff’s sister Jennifer Chalmers said after the announcement that state police had found remains. “This is not the positive outcome that we continued to hope and pray for over the past week. We thank everyone for their time, dedication and support in our search to find Nicole and ask that you keep our family in your prayers in the challenging days ahead.”

On Wednesday April 20, Fire Station 32 hosted a public vigil for Mittendorff. Family, friends and other supporters swelled in the station’s garage.

“There is a candle…that is the candle of hope to bring Nicole home,” Chief Bowers said. “That candle will burn here, at Fire Station 32 until Nicole comes home. The flowers represent the vibrant Nicole that we all know,” Bowers said.

As of Friday morning April 22, the candle and flowers were set up at the entrance to the station, with the candle continuing to burn.

Fire Station 32 was filled with Mittendorff's friends, family and colleagues. The station was so filled with people, many stood outside while waiting for the vigil to begin.

Liz Moisey competed with Mittendorff in triathlons to raise money for the Leukemia and Lymphoma Society. “She was incredibly well-respected and very friendly, I have a lot of friends who became close with her doing certain races,” she said.

Sandy Lohr, a member of Mittendorff’s Woodbridge church, also attended the vigil to show support and pray for Mittendorff’s return.

“She was very friendly, was in church mostly every Sunday and Sunday school,” Lohr said.

Members of Fire Station 32 were not available to speak with the media before press time.

As investigators continue to piece together the timeline between Mittendorff’s last contact and the vehicle being found, they ask anyone with information to call Virginia State Police at 703-803-0026 or #77 on a cell phone, or email at questions@vsp.virginia.gov.