New Art Exhibits to Open in Reston and Herndon
Votes

New Art Exhibits to Open in Reston and Herndon

Local artwork to be on display. 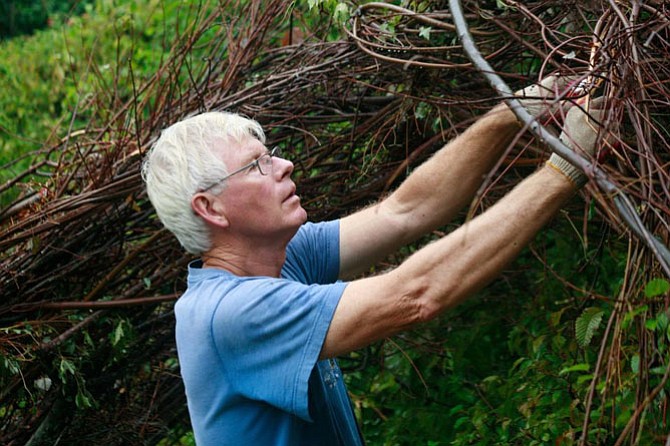 A large-scale public art work in Reston by artist Patrick Dougherty will be set up at Town Square Park, directly across from the GRACE gallery. The sculpture, which will take several weeks to build, will open to the public on April 25. Photo provided by Reston IPAR

Many residents of Fairfax County have an appreciation for various mediums of visual and preforming art. Several nonprofits within the Reston and Herndon area, including ArtSpace Herndon located on Center Street and the Greater Reston Arts Center (GRACE) have helped showcase local artwork, and as some exhibits close, new displays will soon open.

Closing on March 3 is the Colors of Nature, a fine art photography exhibit by Kathy Kautter. The exhibit explores the vivid beauty of the natural world around us. This display was at the Reston Jo Ann Rose Gallery at Reston Community Center. Kautter is a Northern Virginia artist whose photography captures the colors and textures in nature. A member of Reston Art Gallery and Studios, her work has been featured in FotoDC exhibits as well as League of Reston Artists exhibits, receiving recognition for her "good eye." On Sunday, March 15 at 2 p.m. the Jo Ann Rose Gallery will host a reception for the Youth Art Month presenting art from Reston’s Elementary Schools.

At ArtSpace Herndon, winners of the 6th Annual Fine Art Photography competition were announced by judge Carla Steckley during the Awards and Artist Reception on Saturday, Feb. 28, 7 to 9 p.m.

On Saturday, March 28, ArtSpace Herndon will host a performance by the Celtibillies, an award-winning quartet of musicians from Abingdon, Va. They play stringed instruments in the style of the Scottish and Irish immigrants who settled in the Virginia Frontier. Led by the fiddle, an instrument originating in the Isles, the band plays Celtic tunes with a mountain flavor. They will be joined by a professional flat-footed dancer, Emily Oleson, performing Celtic and Appalachian dance. The Celtibillies have appeared at the Smithsonian Folklife Festival, Blue Ridge Music Center, and the Virginia Highlands Festival. Emily Oleson has a M.F.A. from the University of Maryland and is pioneering a program in Vernacular Dance at Davis & Elkins College in West Virginia.

Currently, a merger is underway between the Council for the Arts of Herndon (CAH) and Herndon Foundation for the Cultural Arts (HFCA) to form a new entity. It is anticipated that the merger will be completed by July 1, 2015. Discussions between the two arts organizations concerning the plan to merge have been taking place over the last year. The Boards of Directors of the two organizations approved the merger plan and have begun steps to prepare bylaws, mission statements and other organizational documents.

The Greater Reston Arts Center (GRACE) and Initiative for Public Art-Reston (IPAR) announced at the end of 2014 that IPAR had been recommended for a $20,000 National Endowment for the Arts ArtWorks Grant to support the creation of a temporary, site-specific, large-scale public art work in Reston by artist Patrick Dougherty. An internationally-renowned sculptor who has created more than 230 sculptural installations worldwide, Dougherty is an environmental sculptor known for his monumental, site-specific sculptures created from regionally-sourced saplings. The project will be at Town Square Park, directly across from the GRACE gallery. The sculpture, which will take several weeks to build, will open to the public on April 25. The Patrick Dougherty installation is made possible through the support of sponsors including the Arts Council of Fairfax County, Reston Community Center, and the Initiative for Public Art-Reston.