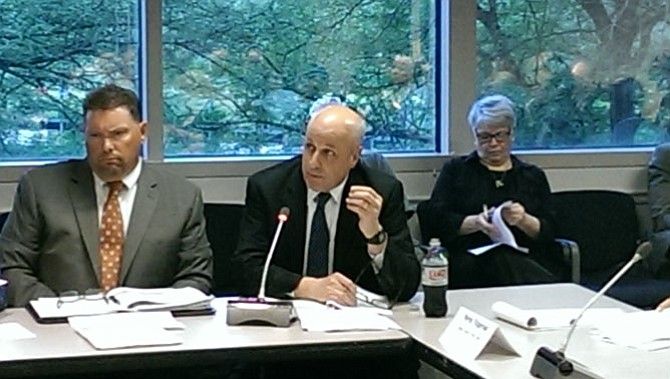 Nearly a year ago, Fairfax County sought an outside opinion on its police department’s use of force. That July 2014 assignment went to the Washington, D.C.-based Police Executive Research Forum.

The organization gained access to unredacted files and case information going back 10 years, as well as police academy training sessions and other areas of the department while conducting the review. While not pursuing cases currently under investigation, the review team did look at use of force cases and deadly force cases.

The concept then was to compare Fairfax County’s policies and practices to other jurisdictions and best practices, and make recommendations for how the county could improve.

Fairfax County published the completed review report online the weekend immediately after they received it. The following Monday, June 22, Police Executive Research Forum executive director Chuck Wexler and director of applied research and management Tom Wilson attended the meeting of the Fairfax County Police Practices Review Commission to give an overview of the document.

THE REVIEW includes 71 recommendations, spanning 92 pages. It and Wexler are generally positive about Fairfax County’s police.

“This is a good department that wants to be better,” said Wexler, “not just good but one of the best in the country.”

If the organization’s recommendations are implemented, the review text states, it would “significantly enhance the [Fairfax County Police Department’s] internal operations and its ability to serve the community in ways that build trust and cooperation, while increasing the professionalism with which use-of-force incidents are handled in the county.”

Wexler chose five main areas for improvement to highlight in his presentation of the review. These included more comprehensive use of force training for police officers that is scenario-based, holistic and would be implemented department-wide.

The second area was a recommendation to explore implementing a policing practice called the Decision Making model, adopted from use in Scotland and across the United Kingdom.

“What they’ve done is designed a format for officers to look at any given situation,” said Tom Wilson, and answer, “What is your threat?” This method, Wilson and Wexler said, is a crucial part of any effort to de-escalate a situation. It requires officers to slow down or take a step back.

Next were recommendations for police recruit training. The review organization found new Fairfax County officers were first given firearms training, rather than starting “with the most significant principles of policing,” Wexler said.

“They ought to hear … about the sanctity of human life, those terms, before being handed firearms.” 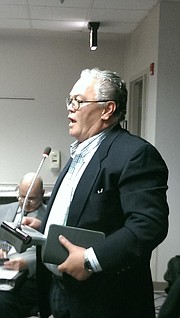 Subcommittee member Jose Santos of Great Falls asks for the Police Executive Research Forum’s opinion on how Fairfax County Police release information. “There’s a knee-jerk reaction,” he said, “a reluctance to air out their dirty laundry.”

The fourth area was how Fairfax County responds to people who are emotionally disturbed or have mental illness. According to Commission member Lt. Col. Tom Ryan of the police department, 43 percent of officers have received Crisis Intervention Training to better handle such situations. Police Chief Edwin Roessler has stated his goal of having 100 percent of officers trained, which Wexler said the review fully supports.

On improving use of force policies, the Police Executive Research Forum recommendations include prohibiting officers from shooting at moving vehicles, investigating all cases where deadly force was used regardless of if the officer hit the target, making sure electronically controlled weapons are used appropriately, prohibiting chokeholds and discontinuing the use of the “precision immobilization technique” for stopping moving vehicles.

“The department is already doing a lot,” Wexler said, “and we have suggestions for how they can do more.”

Commissioner Eric Clingan of the NOVA Law Firm asked how long Wexler expected it would take to “change the culture” with respect to the recommendations from the Police Executive Research Forum, and what kind of monitoring should be done.

Wexler responded that changes would have to come both from Fairfax County Police leadership and the training academy. “I don’t think the leap is that far to go,” he said. “The department is already going in that route.”

Commissioners John Lovaas, a Reston resident, and Sal Culosi, father of Dr Salvatore “Sal” Culosi Jr., who was killed by a Fairfax County Police officer, asked if citizen oversight and use of Special Weapons and Tactics teams were covered in the review. Wexler said those topics were “not part of the scope” of the review.

In answering a commission member, Board of Supervisors chairman Sharon Bulova explained this review was separate from the outside review of police policies for releasing information, something the supervisors decided to move forward with earlier this year. That review, being a budget item for the new fiscal year in Fairfax County (July 1), has not moved forward much.

“I’m disappointed in the timing,” Bulova said. “It’s no excuse.”

FOLLOWING THE PRESENTATION by Wexler and Wilson, Dr. Steve Band spoke to the commission on the “human element” — the psychological and biochemical effects of being a police officer faced with life-threatening situations.

“It’s ‘Oh sh-t, that awareness of extreme vulnerability,” said Band. “Once you jump on that continuum, it’s like deer in the headlights. Gaining control of that situation requires muscle memory and committing to action.”

The meeting concluded with reports from each of the five subcommittees — Use of Force, Communications, Mental Health and Crisis Intervention Training, Recruitment, Diversity and Vetting, and Independent Oversight and Investigations — all of which have different deadlines for submitting recommendations to the full commission.

Monday, July 27 is the next date scheduled for the meeting of the full ad hoc commission at the Fairfax County Government Center. Chairman Hershman said county staff is working on securing an alternate location that would be convenient to residents that may have difficulty reaching the government center.