Not Going Away
Votes 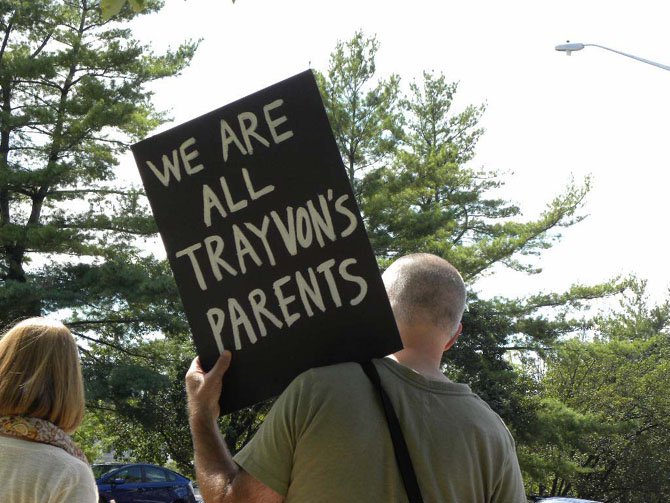 Several groups hold a monthly vigil outside the NRA headquarters in Fairfax on the 14th of each month to remember victims of gun violence in the United States. Photo by Abigail Constantino/The Connection 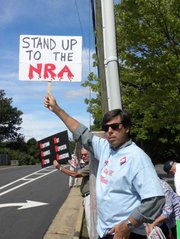 Clint O’Brien joins more than 50 people on Sunday, Sept. 14 for a vigil outside the NRA headquarters in Fairfax to raise awareness for increased gun legislation.

The Reston-Herndon Alliance to End Gun Violence met outside the National Rifle Association’s headquarters in Fairfax on Sunday, Sept. 14. The group has met there on the fourteenth of every month since the shooting at Sandy Hook Elementary School in Newtown, Conn. on Dec. 14, 2012.

They have been a fixture outside the NRA building so that Officer B. Batten said that he got a call from NRA asking where the group was that morning. 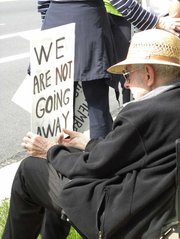 Jim Gilkeson, retired, of Harrisonburg, hopes people will do a lot more thinking about safety, during a vigil outside NRA headquarters in Fairfax on Sunday, Sept. 14.

Joanna Simon, the vigil’s organizer, said that when the 14th falls on a weekday, they meet at 10 a.m. but when it falls on a weekend, they meet at 2 p.m., just after church. They were joined by McLean’s Concerned Citizens Against Gun Violence and the United Universalist Congregation of Fairfax, which is based in Oakton.

The vigil started as a reaction to the shootings at Newtown but has grown to include all victims of gun violence and their families, including the shootings at Virginia Tech and the Navy Yard.

Simon said that one of the group’s goals is to inform people of their point of view in an effort to affect who gets elected. They are hoping to get Democrat John Foust elected to the 10th Congressional district against Republican Barbara Comstock.

Viewpoints: What do you hope to accomplish with a monthly vigil?

Ben Zuhl, of the Concerned Citizens Against Gun Violence, handed out flyers detailing the voting record of Virginia politicians on the issue of gun control. He gives Comstock an F for voting consistently against measures to curb the purchase and carrying of guns.

Del. Kenneth R. Plum (D-36th) said that this is about “protecting people.” He is a proponent of expanding background checks. “Most people are talking about reasonable gun laws that say we do background checks to make sure that people who buy guns haven’t committed violent crimes or they’re not mentally ill.”

Several drivers honked their horns in support. But there were also drivers who used their horns to express their disagreement or gestured with a thumbs down right before pulling into the NRA parking lot.