Art on the Lake
Votes

Art on the Lake 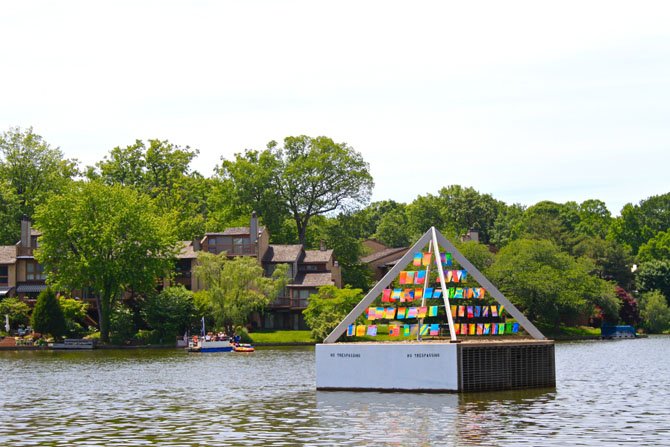 The Pyramid of Light on Lake Thoreau. Photo by Reena Singh.

Colorful panels dance in the wind, dappling diffused light over the spillway that was once an eyesore.

The “Pyramid of Light,” a project sponsored by the Initiative for Public Art - Reston and created by students at nearby South Lakes High School may be the start of annual public art displays at that location.

“We thought it would be a wonderful way to educate people about public art,” said IPAR Executive Director Anne Delaney. “Hopefully, we are creating a new generation of artists.”

The installation can be seen on Lake Thoreau on South Lakes Drive. It was placed there on May 8 and will stay up until early July.

“People who have seen it really love it and would like to see it up longer,” said Delaney. “We’ve been asked why we haven’t done something on the spillway before.”

“We had everyone from freshman to seniors helping to erect the pyramid in the school parking lot,” said Rando.

Many students may have helped to create the design and build the structure during the year-plus long process to get it approved by the Reston Design Review Board, but four students developed it alone the majority of the past year.

“I think what’s so great about the project is that the majority of the work was done by high school students, and that says a lot about the capacity of South Lakes students,” said senior Sammy Nazam, one of the core four students. “I’m very proud of it.”

He said he has always been interested in art and jumped at the opportunity to create a public piece of work.

“It was such a different learning experience that can’t be compared to learning in the classroom,” said Nazam. “There was definitely a business aspect to it. We had to sell it to the board and market it to get it approved.”

Nazam said he learned much more about engineering through the project, rather than about art.

Rando said this type of learning is a part of the art department’s STEAM initiative - which stands for Science, Technology, Engineering, Art and Mathematics.

At one point, he wrangled a group of technology students to create computer-aided designs to build a to-scale model to send to the DRB.

“It was amazing to see the students, when asked, were able to think on their feet,” said Rando.

The project, approved in the fall, had to be drawn and redrawn several times. Rando said the DRB treated the students respectfully but as if they were professionals.

“This was a real-world project that needed to be engineered, studied, figured out using multiple disciplines,” he said.

The Pyramid of Light will serve as a lesson for future public art pieces by the school. The students learned that wind and rain are forces that may be more powerful than it seemed, creating some damage to the structure.

“The wooden pyramid structure is very stable, but we underestimated the strength of the wind, so some of the wires and panels snapped,” said Nazam.

However, he is still proud of the work he helped to create.

“I honestly thought it was fantastic,” he said. “It brought some tears to my eyes, because we had spent so much time on it.”