Community groups concerned about raises and effect on local traffic. 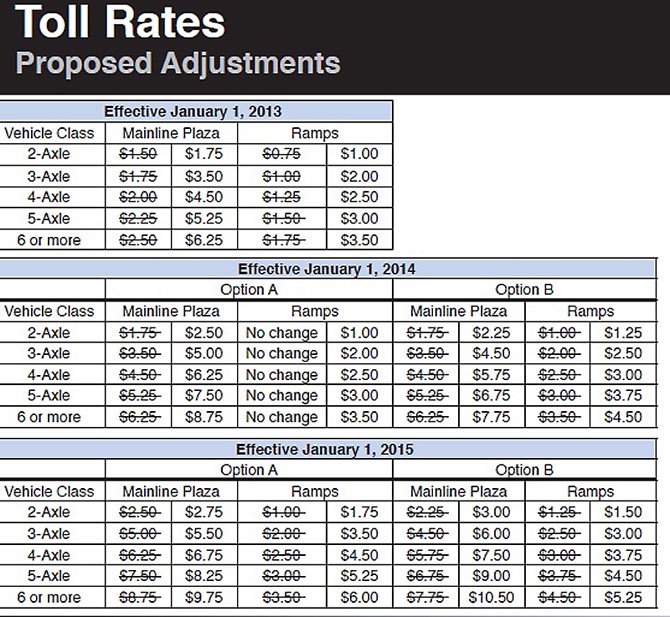 The finance plan for the Dulles Toll Road up to 2015.

ACCORDING TO MWAA, “toll increases beyond 2015 will be analyzed based on actual financial performance and potential receipt of any additional funding.”

The Greater Reston Chamber of Commerce released their official response, which includes a preference for greater increases at the mainline plaza.

“We prefer greater toll increases at the main toll plaza than at the ramps so that drivers will be encouraged to use the [Dulles Toll Road] within the corridor for those short trips where transport is not an option,” they said.

The finance plan for the Dulles Toll Road up to 2015.

The GRCC also called for “some certainty about the toll rates and the transportation improvements that will be made to allow ease of travel.”

MWAA’s 2012 budget calls for 46 percent of its $109 million budget to be used for Metrorail construction financing, and 22 percent going to corridor improvements, six percent to renewal and replacement of noise walls and 26 percent for operations and maintenance.

The proposed toll rate increases along the Dulles Toll Road. MWAA projects toll road revenue to cover approximately 54 percent of the almost $5.6 billion for both phases.

So far, there have been no funds put forth from the federal government for Phase Two, and only $23.3 million has been put forth from the state. The other funding sources, Fairfax County, Loudoun County and MWAA aviation funds, are fixed as a percentage of the total amount. Fairfax is responsible for 16.1 percent, Loudoun 4.8 percent and MWAA aviation funds 4.1 percent.

But funding from the toll road is not fixed, by either a dollar amount or percentage. This has raised concerns that should costs go up, the toll road will go up, pushing to burden on its users.

Reston 2020, a committee of the Reston Citizens Association, has released their own take on the increases, which they believe will only serve to increase traffic on Reston’s other roads.

This will lead to more congestion, pollution and maintenance requirements. The RCA proposes that toll road users be responsible for a fixed 25 percent of costs, which would prevent tolls from rising above $2.85.

MWAA is currently accepting public comment for a report which will be issued in late October. Comments and questions can be submitted at www.mwaa.com/net/dtr_toll.aspx.